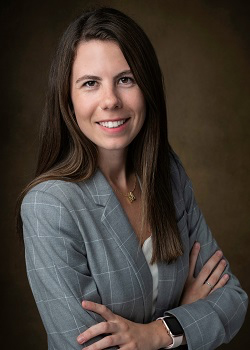 Mikaela M. Smith was born in Southern California, spending her formative years in California, Texas, and Virgina. Mikaela moved to Tennessee to attend Eastern Tennessee State University where she graduated in 2016, with a degree in Criminal Justice and Criminology. During her tenure at ETSU Mikaela received Dean’s List recognition and served on the Executive Board of the Sigma Kappa sorority as Vice President.

Mikaela earned her Juris Doctorate degree from Lincoln Memorial Duncan School of Law in 2019. During her time at Duncan School of Law she was a member of the Immigration Law Society where she served as treasurer. Mikaela also completed an internship with the Office of Chief Counsel for the United States Customs and Border Protection in Washington D.C.

In 2019, Mikaela was admitted to the Tennessee Bar and began practicing law in Greenville, TN with the Law firm Foster and Potter P.C., and in 2020, Mikaela moved to Knoxville and became the lead attorney in the Knoxville office of Foster and Potter, P.C. focusing on family law.

Ms. Smith’s practice is based in Knoxville, but she has represented clients throughout East Tennessee. She works at the firm in the areas of family law, estate law and general litigation.